Yuki: Welcome, all. Sorry for the delay tonight. We hit a little technical snag and fell behind a bit. Rest assured, though, all is well.

Assistant: Holy shit, that was a close one! Cops are gone. No one’s stayed behind to scout us.

Assistant: …Right. We seem to be getting closer to the source. Not much longer now. It seems to have pierced another reality. I’ve sent the coordinates to you.

Yuki: Excellent! Strap in everyone, we’re going in! Hey…wait a minute. This seems familiar… 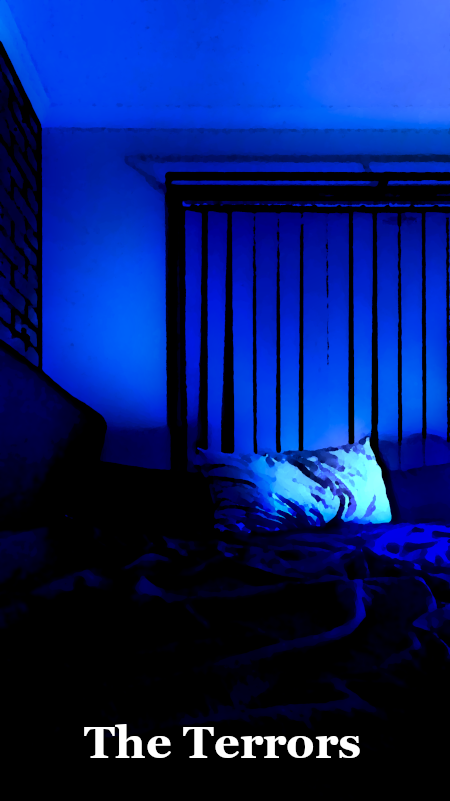 The attacks came quick and hard. No warning whatsoever. One minute all the men were hidden in the thick underbrush and the next they were in pieces scattered about the tall grasses and fallen leaves. Explosions rocked the ground, which caused the heavily armed combat suit to topple over.

“Goddamn stabilizer’s shot to hell! Cover me!” the pilot (Max Metcalf wasn’t able to recall who specifically. Only two of his close friends were in the unit, the rest they had only met half a day before—and all radio chatter up until now was to be silenced) shouted. “They’re coming from your nine!”

Max pivoted the torso of his suit ninety degrees to his left, armed his main weapon and fired blindly into the thickets. Dull thuds of explosions echoed in the distance, obviously he’d hit one of the attacking troops.

“Alex,” Max said, “get over there and pick up the fallen suit, see if it’s still mobile.”

“I’ll keep both of you covered,” he said as he continued to send waves of bullets into the night. The torrent of enemy fire slowed to a trickle and eventually stopped altogether. Max popped a few more shots and maneuvered toward Alex and the fallen suit.

“This guy’s not going anywhere in this thing. Might as well have been blown to bits.”

“MacKenzie’s out. Bleeding a little, too. We gotta retreat.”

“Done. Let’s get him out and fall back.”

Satisfied the enemy had retreated as well, Max took his finger off the trigger and climbed out of his cockpit and made his way to Alex.

“We’ll need to be as gentle as possible, Max. I really don’t know how bad he’s hurt. It doesn’t look bad…but you never know.”

“Okay, I’ll take him up. I’m almost out of ammo anyway. I’ll need you to lay on some cover fire this time around if we get jumped again.”

“There any safe houses around?”

“About twenty-five klicks southwest of here. We might have to ditch the armor down the line. It’s near the middle of one of the evacuated suburbs.”

“I’ll fire up the emergency sig—”

“DIE!” a maniacal voice screeched from above.

Max and Alex turned in unison, going for their holstered weapons. But the figure partially hidden amongst the branches was already firing (a small rocket launcher), aiming right at them. The two dove aside as the smoke streak made its near-instant trip to the fallen suit, they smacked the ground and curled up beneath the large mechanical legs. They both felt the force of the explosion push them harder into the ground. The fires sizzled and kissed their skin—all within seconds, and then it was over.

Alex drew his pistol, rolled from under the leg, aimed, and pegged the man in the throat with one shot. Whether it was the force from the bullet passing through his body or the sheer surprise of the attack that sent the soldier over the branch and to the ground thirty feet below, Alex would never know.

Max scrambled back up to the cockpit, which was now aflame, and almost threw up at the sight. Chunks of McKenzie lay splattered in a deep pool of blood gathering where a seat had once been. Nothing recognizable left, only hamburger meat and soup.

Some time later, Max woke up with a start. Fresh panic met him once he realized his eyes were wide open and yet he was surrounded with total darkness. A sheet was wrapped in knots around his legs and he sat on a rather comfortable mattress. Where was he?

“Where are you?” Panic started to eat away at the young pilot.

“I can’t see!” The wavering in his tone gave his unease away quite well.

“Relax.” A lantern came on, dim. “I just had the lights out. We’re in the basement of the safe house. You’ve been out since the forest attack.”

“Oh, God…” Max slumped, rubbing his forehead and eyes with his fingertips. “I thought I’d gone blind there for a minute. I woke up and had no idea where I was.” His breathing quickened, nearing hyperventilation. “I…couldn’t…for all I knew…”

“It’s alright, we’re both safe now,” Alex explained, stretching his limbs, “I even sent out an emergency signal as soon as I sat you down. An extraction team should be here within a few hours. Here, have some water; you haven’t had a drink in awhile.”

Max took the bottle that was handed to him and took down two healthy gulps. “Thank you very much. Was it much trouble getting here?”

“Nah. The enemy fell back completely thanks to you.”

“But you had to carry me at least three or four klicks once the forest cover dwindled.”

“You only weigh a buck-fifteen at best; it wasn’t a problem.”

“Metric for all us non-imperialists, please?”

Alex rolled his eyes up and pulled a weird face as he did the mental math. “Something like…fifty kilos?”

Max frowned. “Fuck you. I know I weigh more than that.”

“Yeah, right,” Alex snorted. “You’re all skin and bones, hardly any meat or muscle to you at all.”

“Bullshit, I’ve got plenty of muscle.”

The two had a good laugh at the playful exchange. All the worries and horrors of war forgotten if only for a few minutes. A low rumbling started up, almost nothing at first, then the boys began to feel the tremors in their chests. Those moments of peace never lasted.

A cold sweat broke across Max’s body. He trembled all over and the water bottle slipped from his fingers, spilling to the floor.

RATATATATAT! .50 caliber snapped off like strands of deadly, over-sized firecrackers. Max started to scream. Both of his hands clutched the sides of his head. His eyes clenched shut while tears streamed down his face.

BOOM! Another mortar dropped, this one within two or three hundred meters.

Max screamed. Both of his hands shot to the side of his head, covering his ears. Tears and spittle poured from his face as he cried. His right hand cracked his temple, over and over again. Like he was trying to beat himself unconscious again.

Alex got up from his sleeping bag and scooped his friend into his arms. He scrambled to the far side of the basement and took shelter underneath a small alcove underneath the staircase. He placed his body over Max’s, who screamed his lungs out all the while.

They had been a part of half a dozen missions now, and racked up a sizable body count. But those times were different, even when some of their own were killed in the throes of battle, he had only seen the equipment being destroyed, never the actual person within the machinery. The sudden realization of what had been happening to his colleagues—what he had done to others himself—was more than he could handle.

The screams cut through the night. They echoed through the cold and empty corridors of the house. Without so much as a second’s hesitation, Alex was off the couch and running back to Max’s room. His bedroom door was wide open and Alex could see his friend had his lower half wrapped in his blankets and wound as tight as a tourniquet. Both hands gripped for dear life at the mattress. His eyebrows were tilted up, his eyes would have been wide as saucers if his eyelids were up. There was no doubt in his mind that Max was having one of his war nightmares. Hardly a day went by anymore where his friend didn’t have one.

It was almost routine now: Max would start screaming and thrashing in his sleep and Alex would rush in and ward off all the ghosts of the past with soothing words (words Max was always able to hear clearly—even without waking, wait for his friend to calm down and fall comatose, and then go back to whatever he was doing (in the case of this night, catching up with an old buddy from high school.

Alex came back into the living room, his old acquaintance, Tommy Beckett, sat rigid on the small sofa, quiet but eyes both puzzled and concerned.

“Everything alright?” came the question Alex had answered nearly a million times before.

“For now,” Alex said, smiling convincingly in attempt to lighten the mood. “We were in the war a few years back, saw a lot of horrible things; he’s never been exactly the same since.”

“Fifteen; same as you.

“Yeah, I was only on the Navy ships—never even made it inside the colony.”

“You were a fortunate one then.”

“I wish I’d been there,” Tommy confided. “I wish I’d been able to help out. Nothing worse than waiting around for hours on end to hear if your friends had come through or died…Goddamn them for not sending us in.”

That comment pissed off Alex to no end, but he did what he could to keep his cool. “You don’t have any idea what the hell you’re saying. You heard Max just now—he has to relive that shit every time he closes his eyes for more than five minutes at a time! Sometimes it happens when he’s wide awake. I don’t wish that on anyone. The fewer people they sent out, the better.”

“No, no, it’s okay, Tommy. I just hate to think about losing anyone else or seeing another suffer like I have.” Alex sighed and walked over to his small kitchenette and opened up the fridge. “I think we both need another beer.”

“Count me in. I need another smoke, we can take it out to the patio.”

“The whole thing’s funny though, in a fucked up macabre way,” he said, following Tommy into the fresh air. “He’s having a hell of a time coping with all of the things he’s seen and done. Killing, to me, came natural. I was only a couple I stopped being bothered by it; didn’t have a second thought about it—unless it was against orders, of course. The fuck’s that say about me.”

Tommy didn’t answer, just looked down and took a drink.

Behind them, Max peered around the corner of the hallway, listening in to the conversation. He rested his forehead on the cold wall and closed his eyes.

Yuki: We’ve definitely breached this timeline before. No sign of the anomaly. You sure we’re in the right place?

Assistant: Spot on. Like…it was in his dream. And then it fizzled out once he woke.

Yuki: Is there still any trace?

Yuki: Alright, keep on it. I’m gonna check the mainframe.

Yuki: She feels a little, I dunno…off. I gotta be sure. We don’t wanna get stuck out there in the Void. Or worse. We’ll be back, ladies and gents. With luck, on time like we’re supposed to be. Good night!