Assistant: I dunno! It was there just a second ago! I’m not getting any other readings either…

Yuki: Dammit! All that time trying to track down the source. Do we at least have an idea where it disappeared?

Assistant: Hang on a sec. Checking. Checking. It’s looking like an area right over here.

Yuki: Excellent. I’m prepping the system for a looksie. Buckle up everyone, we think we’ve found that firey bastard from last time. There may be a bit of turbulence on the way in. 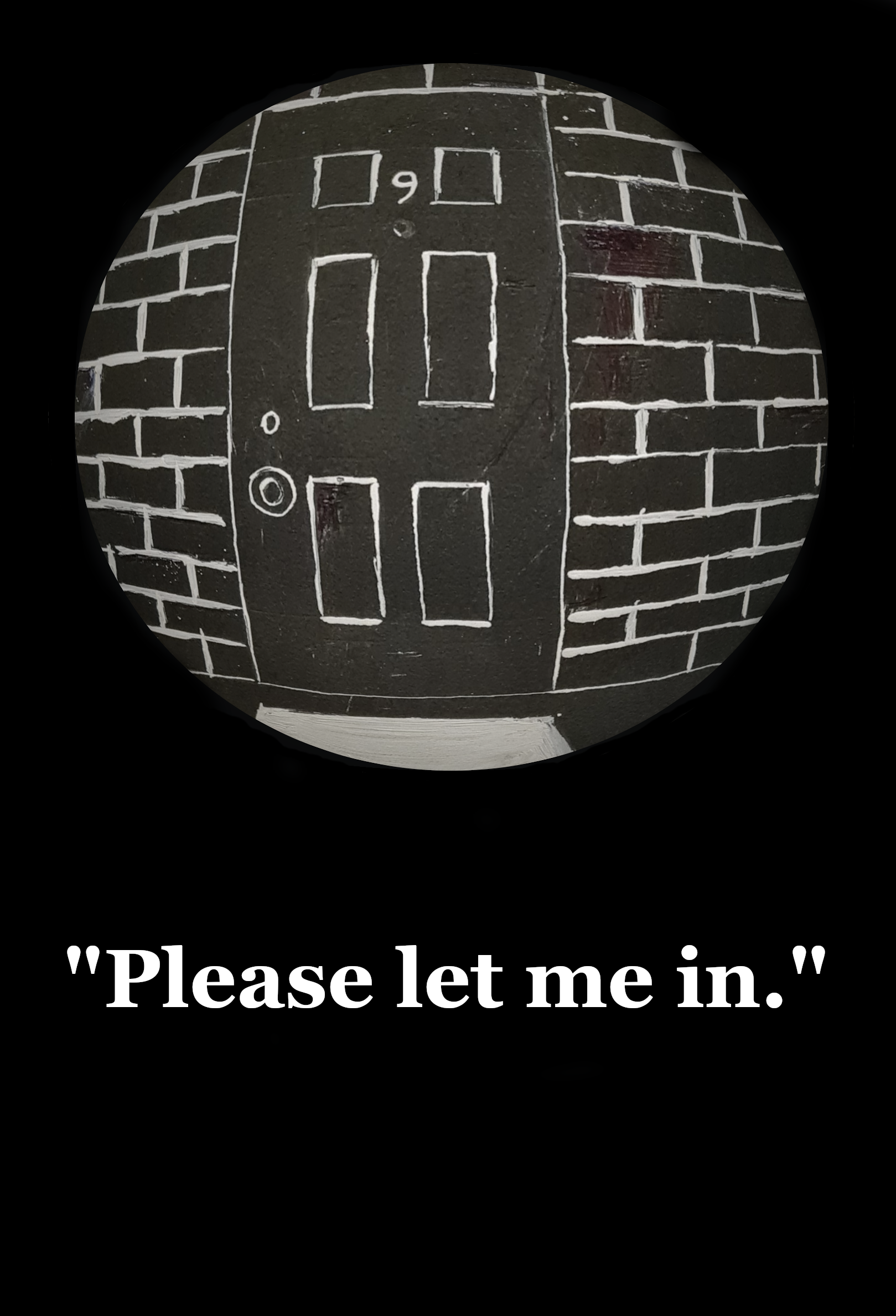 The words came after an urgent knocking. I rose from my chair, muting the television as I limped across the living room. I’d been startled by the sudden and sharp rapping. It took a couple seconds to realize what was happening. No one ever came knocking unprompted. Five-plus years in the apartment and each visit was preceded by a phone call or careful planning ahead. Those knocks were always expected and the door was unlocked and opened without hesitation.

The peephole had never gotten any use. I pulled aside the heavy silver cap and wiped away the dust from the tiny, circular glass. The fisheye lens let me see the stairs off to the left and the bulk of this floor to the right—all but the entrance to my next door neighbor. I stood there for a moment, puzzled. There wasn’t the hollowed clunk of the stairs, so no one beat their feet down to the second floor. And after I thought about it for a second, I realized that if it wasn’t someone in the building screwing around, how did they get inside?

Today was my first day off in six days, so I absolutely vegged out the whole time. The last person to leave was one of my neighbors on this floor and it definitely shut and latched behind them. No cars had come or gone since that time. I let my eye drink in the warped view of the third floor for thirty more seconds in stone silence and decided to call a quits. I didn’t even notice I’d been holding my breath until I pulled back from the peep hole.

I turned my back on the door and started to make my way back to the recliner when the loud knocking broke the silence. I jumped and spun around, pretty sure that I peed myself a little. The pounding on the door was so violent and urgent that I felt the vibration. Silence fell again and I stood frozen in place. After a beat, that same quiet, high-pitched voice spoke again, “Please let me in.”

Within a second I was flush against the door and my eye was up to the lens again. Once more, nobody was in the hall. Whoever it was, they had to be hiding directly to the left or right. Against my better judgement, I unlocked the door and yanked it open to catch the culprit—

—only to find a boy standing not three feet in front of my face. I jumped backward and started to scream, but choked on my own spit instead. I hacked up a lung at first and steadily gained control of my breathing and felt my heart go back down to a reasonable pace. I definitely pissed myself that time. All the while the boy just stared on with a mild look of concern written across his features. Thick, untidy hair framed the pale skin of his face and neck and nearly obscured his eyes; it was damp and matted to his head. Tiny hands clutched at the base of the oversized long-sleeved shirt he wore. Curiously, he had on a pair of shorts that were also too big and went halfway down his shins. His sneakers were sopping wet and caked with mud. I looked him over again and realized he was soaked all the way through.

“Jesus, kid! Are you okay? A-are you here with someone?”

The boy shivered and wrapped his arms tight around himself and shook his head.

I stepped out into the hall and put an arm around the kid’s shoulder and brought him into the apartment.

“T-trying to get out of the rain,” he said through chattering teeth. “Your light was the only one on.”

I closed the door behind us and glanced out the living room window. The parking lot pavement glistened under the street lamps; it was practically a swimming pool down there. A fine mist hung in the air and a thick fog, out in the distance, rolled closer and closer to us. It had been pouring and for quite some time.

“Go ahead and take your shoes off. There ya go, right by the door.” He slipped off his sneakers and placed them aside. “We can’t have you freezing to death, can we? Follow me.” I led him down the short hallway, grabbing a towel and washrag from the linen closest on the way down, and showed him the bathroom. I ducked inside my room, opposite of the bathroom door, and grabbed a clean shirt and pajama pants. I handed the lot over to the kid.

“Here’s some dry clothes for ya. You’re probably tired of water right about now, but you can warm up with a hot shower if you’d like.”

“We’ll get your clothes dry, too. I’m gonna put the kettle on. You want anything to drink?”

“I’ll have some of that. Black…please.”

“Sure thing.” I let him have some space and headed to the kitchen. The kettle started its boil and the coffee maker started its magic. A few seconds later, the bathroom door opened and the kid appeared around the corner, towel around his waist, holding a neatly folded stack of his clothes.

“Where should I put these?”

“Right over there’ll be fine,” I said, nodding to the dinner table.

He put everything down next to the bills and check stubs and adjusted his towel and turned back toward the bathroom. “Thank you again,” he said, barely audible.

Once I heard the door close and the hiss of the shower, I picked up the clothes and strode out into the ill-lit common area. A dark patch of rainwater was still visible where the kid had been standing just a few minutes before. I glanced down to the first floor and confirmed that the building door was closed properly. Still weird. Unless he had a key or someone buzzed him in, he shouldn’t have been able to get in. The laundry room door on the far wall of my floor was slightly ajar. Thankfully both the washer and dryer were both empty. I threw in the clothes and popped in a quarter. The dryer started its tumble and I headed back into the apartment.

My guest joined me not too long after the cups had been poured and put on the table to cool. He walked in, hair still a shaggy mess, but had more of a bounce to it thanks to some shampoo and conditioner. My clothes were also comically large on him. The collar was loose enough to show most of his chest, the sleeves fell halfway down his forearms. The drawstring on the pajama pants was pulled tight and the leg openings were rolled up several times above his bare feet to keep from tripping over them. He exhaled as if this was comfort he’d not known in quite a long time and joined me at the table.

I’d figured he was just some poor kid who’d been lost or ran away from home. But no, it was nothing like that at all.

“No, sorry. I’m trying to find my friend. I’ve been just about everywhere looking for him. Name’s Charlie, by the way.”

We both sipped from our mugs.

“Forgive me for saying so, but you look a little too young to be out there searching for anyone.”

Charlie smirked while sipping at his coffee. “I get that a lot. You don’t gotta worry about nothing like that. I’m twenty…two.”

I nodded along. “So your friend went missing?”

“Yeah. Something like that. We grew up together in the same foster home, stayed there ‘til we were eighteen. He moved out first and then I did a few months later. We lost contact with each other down the road. One day, his name comes up and that he’s living around these parts.” He paused and added sheepishly, “I guess I got a little lost. Then the rain started up.”

“Mhmm. I’ve been driving around a lot, so I thought I’d stretch my legs.” He sighed. “I guess I wasn’t paying attention and before I knew it, I was out of the ‘burbs and in the country. Man, and I’ll tell you, it was weird seeing apartment blocks out here in the middle of nowhere.”

“I thought the same thing when I found this place. That’s why I signed the lease—nice and quiet with practically no traffic.”

We chatted on for awhile. It was nice to have someone to talk to. Working full time in a warehouse with a lot of surprise fifty- to sixty-hour work weeks did not yield a lot of free time to hang. When I was free, I was either too sore or too tired to go out. Ah, the glamorous life of the American working class!

The buzzer for the dryer was our cue to end the conversation for the night. We got his clothes from the laundry. And, as if to cement Charlie’s place in the apartment for the night, the pattering of rain on the roof started up again.

I brought out a spare pillow and blanket to the living room. “You can use the couch or the recliner, both are comfy as hell. Remote’s on the chair with plenty of channels to choose from.”

“You remember where you parked?”

“I think so. It’ll be easier to get my bearings in the daylight.”

“If it’s raining tomorrow, I’ll give you a lift on my way in to work.”

“No prob. I’m gonna hit the sack. See you in the morning.” I started on back to my room.”

“By the way,” Charlie said, stopping me in my tracks. “What happened to your leg?”

I gave lefty a gentle slap. “Six years of being a loyal employee. G’night.”

A minute later I was in my bed trying to drift off to sleep. If Charlie still had the TV on to wind down, I didn’t hear any of it. The last thing I saw was the moonlight shining through the blinds. Somewhere out there rain clouds were starting to part and the weather was making a turn for the better.

I don’t know how much time passed, maybe five minutes or five hours, but it was still dark when I jolted awake. I was on my back. Charlie was on top of me, his face inches from my own, snarling. And in the instant before I screamed, I could swear that in the cool blue light, his eyes glinted like those of a nocturnal predator closing in on its prey.

Yuki: Well, that was…interesting, but not the monster we’re looking for. Where the hell could he be? We’re in the right area, yeah?

Assistant: 100%. The last traces of the signal came from this zone.

Yuki: Our job’s not done yet. We’re gonna have to scout this area. Hope you packed your Thermos.

Assistant: Both of ‘em.

Yuki: Okay then. Folks, this is where we’ll have to leave you. We’ll see you next time. ‘Til then, stay safe out there.